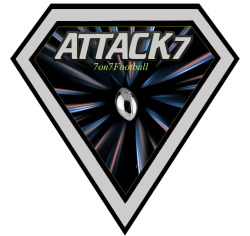 All rules are in accordance with High School football rules including
penalties and penalty yards with all exceptions stated below.

2. STARTING THE GAME
A) Each site will have a designated central time keeper. All games will begin and end on
this person’s instructions. He will also announce the time remaining at the 10, 5, and 2
minute marks.
B) Visitors will have first possession and wear white (top team in bracket or first team
listed will be the visitor). The home team will have first possession in the 2nd half and
wear a dark color (bottom team in bracket or 2nd team listed will be the home team).
Teams must be on opposite sides of the field) NO TEAM WILL BE ALLOWED TO
PARTICIPATE WITHOUT SHIRTS! Team sidelines must be on opposite sides of the
field. Visitors (wearing white) will line up on the right side of the field when facing the
end zone. Home (wearing dark) will line up on the left side of the field when facing the
end zone.
C) No school football jerseys of any type shall be worn. T-shirts, Under-Armour-type,
personal jerseys or basketball-type sleeveless shirts are permitted. We recommend that all
teams have shirts with numbers on the back.
D) Players are permitted to wear standard football cleats with plastic or rubber spikes.
NO METAL SPIKES ARE ALLOWED!
E) Ball always placed on right hash mark when at the 45-yard line (30-yard line for 9-20
year olds or 5th grade and below).
F) Each team will use its own ball during offensive possessions. 8th and younger
divisions may use either High School or Middle School standard size footballs. High
School divisions (9th and up) MUST use the standard size high school sized football. 9-
10 year olds and below may use a TDJ size football.
G) Referee will announce score before each offensive possession begins.

3. MOVING THE BALL
A) No kicking/punting.
B) Field is marked at 15 yard intervals with cones. (3 first downs without a penalty would
result in a TD). Field is marked at 10 yard intervals with cones for 5th grade and below.
C) Possession always begins at the 45 yard line at the right hash (30 yard line for 5th
grade and below).
D) Offenses always move in the same direction.
E) NO PASSER MAY RUN WITH THE BALL. ALL PASSES MUST BE FORWARD.
A pass caught behind the line must be forward. The only laterals that will be allowed
will be laterals that occur AFTER the completion of a forward pass.
F) If a forward pass does not cross the LOS and before the 4 second count has expired, a
defensive player tags the ball carrier behind the 45 yard line, the play is a SAFETY.

4. SPECIAL RULES
A) No blocking.
B) Receiver/Ball carrier is legally down when touched below the neck with one or both
hands. (Excessive force by shoving, pushing, or striking a blow will be penalized by
automatic first down and 5 yards. Player will be expelled if ruled unsportsmanlike &
flagrant).
C) Fumbles are dead balls at the spot with the last team retaining possession. A muffed
snap is not a fumble/dead ball. The 4.0 second count remains in effect on snaps.
D) Each team will have 25 seconds to snap the ball once it has been marked ready for
play; delay of game penalty will be a 5-yard penalty.
E) The QB is allowed 4.0 seconds to throw the ball. The Referee starts a stopwatch on the
snap of the ball from center and stops the watch as soon as the QB releases the ball.
1. If release is under 4.0 seconds, the play goes on.
2. If the referee sees that the clock has exceeded 4.0 seconds, he waits until the play
is over (the play is not blown dead), then brings the ball back to the original line
of scrimmage with loss of down.
F) Defensive Pass Interference will be a spot foul (1st down at the spot).
G) Responsibility to avoid contact is with the defense. There will be NO chucking, or
deliberate bumping or grabbing. These actions will result in a “tack on” penalty at the end
of the play (5-yard penalty).
H) Offensive pass interference is the same as NCAA rules.
I) Interceptions may be returned however, defensive players may not block anyone
subsequent to an interception. If an interception is returned beyond the 45-yard line (the
offensive origination point) it is a touchdown and point after attempt should ensue.
J) Offensive team is responsible for retrieving and returning the ball to the previous spot
or the new scrimmage spot. Clock does not stop and any delay by offense in retrieving
and returning the ball TO THE REFEREE will result in a delay of game and will be a 5-
yard penalty from the succeeding spot.
K) The offensive center is not an eligible receiver (all teams must have a center – the
center may be any player). The center is responsible for establishing the succeeding spot
as designated by the Referee.
L) The center will be responsible for setting or re-positioning the Referee’s bean bag at
the line of scrimmage.
M) No taunting or “trash talking.” (5-yard penalty & expulsion if flagrant or repeated).
N) The offense must gain at least 15 yards (10 yards for 5th grade and below) within 3
plays while the offense is in the first two thirds of the field (the first 2 15 yard segments
of the field) or the defense takes over. (There is no kicking). Once the team has entered
the final third of the field (the third 15-yard segment of the field), the offense must score
within the first four downs.
O) Fighting: the player(s) involved will be ejected from the game and tournament. If a
team fight occurs, the teams involved will be ejected from the tournament and denied
participation in any/all state qualifying tournaments and the state tournament.
P) Any dead ball foul on a play that results in the defense getting the ball will result in a
loss of down penalty, as the team cannot be penalized beyond the 45 yard line (30 yard
line for 5th grade and below) starting position. The defense – not the offense – would be
starting play with 2nd down.
Q) For 7th grade divisions (teams entering the 7th grade in the fall) and below, one coach
is allowed on the field for the team’s offensive possession. The coach must remain
behind all offensive players at all times. A coach is not allowed on the field if the team is
playing up in the 8th grade (teams entering the 8th grade in the fall) division.
R) Snapping of the ball by the center must be between the legs.

6. OVERTIME RULES
After coin flip to determine first possession, teams will alternate 4 down series from the
15-yard line (10-yard line for 5th grade and below). A winner is determined when one
team outscores the other team during an overtime session. Each team must go for two
points on the conversion attempts beginning in the second overtime.

7. TIME
A) 20-minute halves (continuous clock for each half–see: “starting the game”).
B) No time outs. (EXCEPTION: Injuries. All games will halt until injured player(s) can
be safely removed from the field).
1. 5-minute halftime/15 minutes between games (the between game time may be
shortened if the tournament is running behind schedule).
2. 7 on 7 tournaments require that all games start/end at the same time. If a team(s)
is(are) late and cannot start when the tournament officially starts, they will be
penalized 7 points and begin play with whatever time is left on the tournament
clock. (Not to exceed 10 minutes of 1st half. Forfeit will occur after 10 minutes of
the 1st half) IT IS IMPERATIVE TO KEEP TO THE TOURNAMENT TIME
SCHEDULE. Teams must be on site and ready to play when scheduled). Injury
time outs may reduce the amount of time between halves and/or between games
to maintain the game schedules.

9. OFFICIALS
(2)-Referee/Field Judge and Back Judge for All Games

10. 7 on 7 COACHES
A) No high school or middle school coach may serve as a 7 on 7 team coach or stand
with the team on the sideline as stated by UIL rules. All 7 on 7 team coaches will wear an
identification tag for clarification purposes. A team may not have more than 4 coaches on
the sidelines.
B) Each team must have a 7 on 7 team coach accompany it to any/all events to serve as a
School Administrator on duty for their particular team(s). No high school or middle
school coaches are allowed on the sidelines during a game. High school and middle
school coaches must watch games from the end zones. This individual is responsible for
the ACTION OF THOSE REPRESENTING HIS SCHOOL!